Cases of colorectal cancer continue to rise in U.S.

Thomas Francis was 24 and a fitness warrior; David Wall was 74, which puts him at an average risk for colon cancer. and had no history of colon cancer anywhere in his family. Neither man had a strong family history of colorectal cancer nor thought they would ever be faced with intestinal cancer.

Both, however, learned the stark reality that colorectal cancer can affect anyone at any age, when each was recently diagnosed with the illness.

Thankfully, Francis and Wall each received the leading-edge care they needed from a combination of providers at Northeast Georgia Health System and Longstreet Clinic and are now fully on the mend.

For Francis and Wall, it all comes down to a simple message: Be aware.

“I tell plenty of folks to make sure they get checked; get a colonoscopy when it’s the right time for them – that includes my younger brother and both of my sons,” said Wall, a Hamilton Mill resident who had never had a colonoscopy until he recently changed primary care providers.

“My new doctor pushed me to get one – I had never had one because I had no red flags, no history of colon cancer in my family.”

He first completed a Cologuard test at home, which returned a positive result.

“Because of that I did the full colonoscopy and was found to have a cancerous mass in my colon and other smaller polyps that were removed,” Wall said. “I ended up having a consultation with Dr. Fernando Aycinena, a colorectal surgeon specialist at Longstreet Clinic.”

The results of the procedure threw Wall into a whirlwind of additional X-rays and doctor visits. Fortunately, further scans showed that the cancer had not spread, and after his meeting with Dr. Aycinena – a board certified colorectal surgeon – the decision was made to proceed with surgery to remove about a foot of his colon. In that procedure, Dr. Aycinena utilized the da Vinci robot at Northeast Georgia Medical Center (NGMC) in Gainesville to remove part of Wall’s colon and lymph nodes, helping the patient to a relatively simple recovery.

The hospital is designated by the Surgical Review Corporation (SRC) as a Center of Excellence in Colorectal Surgery, Minimally Invasive Surgery and Robotic Surgery, among others.

In fact, just one month removed from the procedure, a cancer-free Wall is already hard at work, keeping his yard clean and tending to a garden.

“I took one pain pill the day I got home from surgery, and that was it; the pain is already virtually gone,” Wall said. “I’ve got no diet restrictions and just six little holes in my belly that healed quickly. I know that’s a lot better than it would have been with regular open surgery.”

Francis too extolls the virtues of robotic surgery – which helped him to a faster recovery from a series of procedures that addressed the colorectal cancer that temporarily derailed his hard-working and active lifestyle in the fall of 2020. He also cautions anyone dealing with unusual colorectal concerns to seek answers and medical help as soon as possible.

“I just thought I had hemorrhoids,” said Francis, who was then balancing the hectic life of a law student at Mercer University while also contesting CrossFit competitions. “I was working out almost every single day of my life and eating clean. And I was suffering almost no symptoms outside of the presence of blood in my stool. At first, I thought nothing of it, but it started getting worse, so I ended up going to the Mercer student health center, and they sent me to a gastrointestinal specialist. That doctor found a mass and knew immediately it was cancer.”

Francis decided to move back home to Forsyth County. “When I got back, Dr. Aycinena was the first doctor I saw.”

Scans of the mass revealed that it had not spread, but the fact that it was stage three meant that Francis faced some tough weeks ahead, as he underwent chemotherapy and radiation in order to try and shrink the tumor in preparation for surgery at NGMC.

The procedure to remove the tumor – a low anterior resection – was also a delicate undertaking, one that required the temporary placement of an ileostomy bag. However, the combination of successful chemotherapy and Dr. Aycinena’s use of minimally invasive, robot-assisted surgery at NGMC has Francis on the road to recovery.

“It was pretty scary for a 24-25-year-old,” said Francis, who underwent the final stage of the multi-step treatment in January. “Dr. Aycinena was great; he didn’t talk down to me and made sure I had all the information I wanted.”

Francis stayed in school throughout treatment. Now he says he’s feeling fine and looking forward to graduating in May of 2022.

“What I tell everybody now though is that if anything feels ‘off,’ to talk to a doctor about it. I know that, when you’re young, you try to minimize your problems. But it may not be as small as you think, and early detection could mean a big difference for you,” Francis said.

After years of helping patients just like Francis and Wall, it is an outlook that Dr. Aycinena shares wholeheartedly.

“The earlier we can find a potential growth or cancer, the better it is for the patient – both in terms of the outcome and the treatments available to them,” said Dr. Aycinena, who is recognized by the SRC as a Surgeon of Excellence in Colorectal Surgery, Minimally Invasive Surgery and Robotic Surgery. “Colorectal health is not something that many people think about, but I stress that patients must remain vigilant and take steps to ensure their continued health.”

“It’s important to get screened and catch it before it’s too late,” Dr. Aycinena said. “That means getting screenings, such as colonoscopies and being aware of any changes in bowel habits.”

An outpatient procedure, colonoscopies require just 10 to 20 minutes to complete under a light sedation – though patients must complete a bowel prep the day before the procedure that allows healthcare providers to view the entirety of the inside of the colon.

During a colonoscopy, the physician gently inflates the colon with air and inserts a microscopic camera and tube into the rectum to observe the entire colon. If the physician observes or encounters any abnormalities inside the colon, such as polyps or growths, they may take a small sample of the abnormality for biopsy.

“Colonoscopy is still the gold standard,” Dr. Aycinena said. “Colonoscopy gives us the most clear and complete look at your colorectal health. And the colonoscopy is completely covered by insurance for patients over age 50. The results of those biopsies could put you on a schedule for further screenings. It’s really a very safe and easy procedure and can make a huge difference for you in your life.”

That is why the American Cancer Society and other major healthcare guidelines suggest that everyone should get their first colonoscopy no later than age 50. And that is for completely healthy and average people. If you have a colorectal condition history or an incidence of colorectal cancer in your first-degree family (mother, father or sibling), then it is recommended that you receive your first colonoscopy at an earlier age.

Symptoms of colorectal cancer may include:

It is also a good idea, no matter your age or health conditions, to adopt a high-fiber diet, avoid excessive red meat or alcohol consumption, avoid tobacco of any type and to exercise and drink plenty of water, as these factors help to prevent colorectal cancer.

“Unfortunately, a typical American diet of red meats and processed foods sets us up to be higher risk,” Dr. Aycinena said. “Smoking, alcohol, diabetes, a lack of exercise, increased body mass index (BMI) – especially obesity – are also contributors. And if you have inflammatory bowel disease, that greatly increases your odds of developing colorectal cancer as well.”

Genetics, he says, also is “a huge factor.” In fact, studies show that 10-20 percent of colorectal cancers have a genetic predisposition.

Yet, as both Wall and Francis well know, colorectal cancer can strike at any age and with no discernable link.

“Blood was my only symptom; I had no fatigue or problems going to the restroom,” Francis said. “So, you have to stay on top of your health.”

“I had no reason to believe I had cancer, and yet there it was,” Wall said. “At my age, nothing surprises me anymore, but it was a huge relief when I found it had not spread.”

Even as we move on from March, they – along with providers like Dr. Aycinena – hope you keep the message of Colorectal Cancer Awareness Month in your heart for all the months to come.

“People taking their colorectal health seriously is one of the reasons why the death rate of colorectal cancers in 2020 was 54 percent less than what it was in 1970,” Dr. Aycinena said. “But we have to stay on top of that and keep driving that number down.”

Request an appointment for a colonoscopy 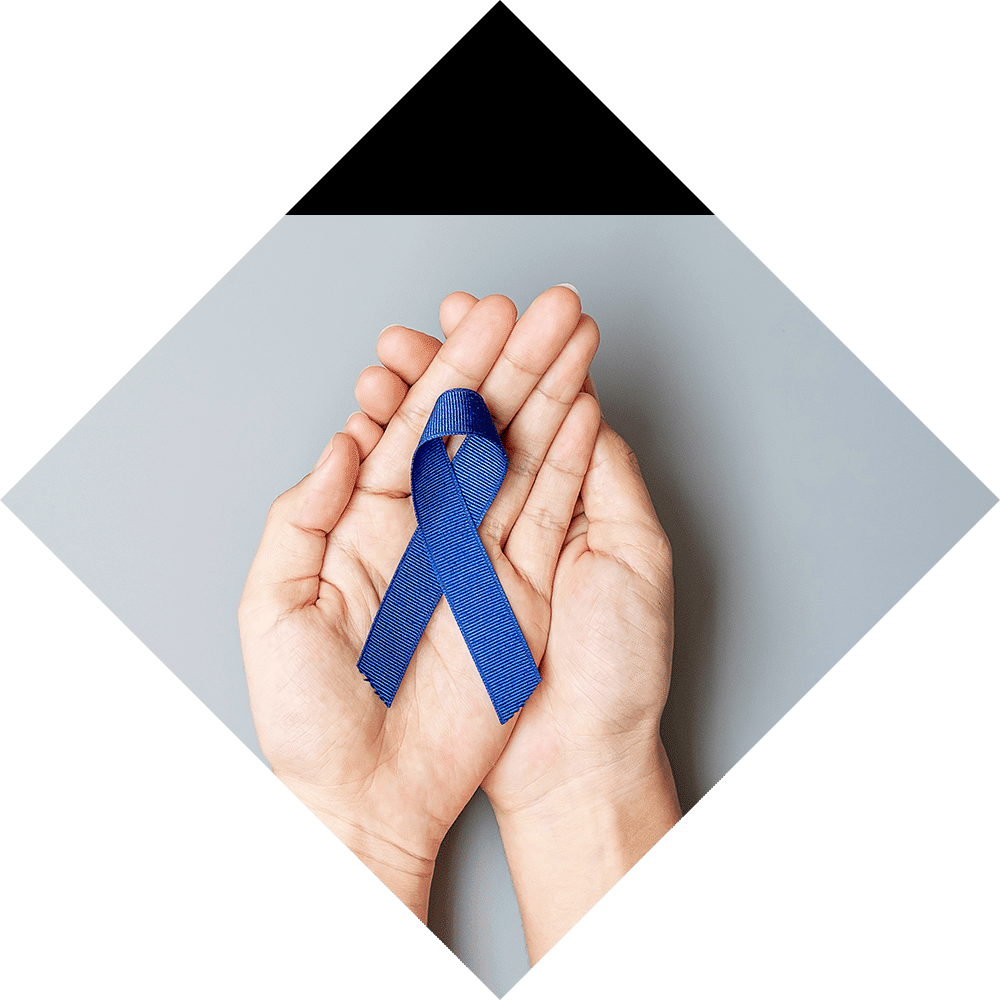 Request an appointment for a colonoscopy